At the West Point Academy in 1854, cadet Carl Rader, a disciple of the fanatic John Brown, is dishonorably discharged for conspiracy. His classmates, Jeb Stuart and George Custer, graduate and are assigned to duty at Fort Leavenworth, Kansas, the most dangerous post in the army. On the way to Kansas, Custer and Stuart meet Cyrus Halliday, the man in charge of building the railroad to Santa Fe, and his daughter Kit Carson, with whom both soldiers fall in love. Arri

ving at the fort, they find the state bloodstained and war-torn, a victim of John Brown’s relentless crusade against slavery. Meanwhile, Rader has enlisted as a mercenary in Brown’s army, which has been terrorizing the countryside with their bloody raids. 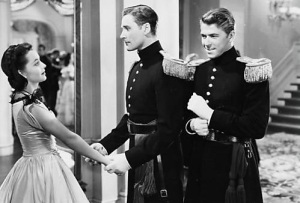 During Brown’s raid on a freight wagon under the protection of the U.S. Army, Stuart and Custer capture Brown’s injured son Jason, and before dying, the troubled boy informs them about his father’s hideout at Shubel Morgan’s ranch in Palmyra. In disguise, Stuart rides into Palmyra, the center of the underground slave railroad, but is recognized by Rader, who takes him at gunpoint to Brown. While trying to escape, Stuart is trapped in a burning barn but is saved as Custer leads the troops to the rescue and drives Brown into seclusion. Believing that Brown’s force has been broken, Stuart and Custer are sent back to Washington, where Stuart proposes to Kit. However, far from being a broken man, Brown is planning to ignite war by raiding the arsenal at Harper’s Ferry.

When Brown refuses to pay Rader for his services, Rader rides to Washington to inform Stuart of Brown’s plans, and the troops arrive just in time to crush the rebellion and hang Brown.