On their arrival in Haiti, Neil Parker and Madeleine Short, a young couple, take a coach that passes a funeral in which the body is being buried in the road. That night, they are followed by several eerie figures who, their coachman informs them, are zombies. He explains that the dead are buried in the road in hopes that the many passers-by will prevent the body from being exhumed and turned into a zombie. As their coach passes him while he is standing in the road, “Murder” Legendre, owner of the local sugar mil 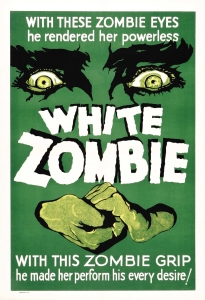 l that employs the zombies, snatches Madeleine’s scarf. Neil and Madeleine arrive at the home of the wealthy Charles Beaumont, whose desire for Madeleine prompts him to ask Murder for supernatural assistance

, although he has invited her and Neil to be married in his house. Because Murder looked deeply into Madeleine’s eyes while she was in the coach, he knows her love for Neil is true and unwavering, and his only solution for Charles is to transform Madeleine into a zombie. Charles is horrified by this alternative, but takes the potion given to him by Murder. During the wedding ceremony, Charles entreats Madeleine to leave Neil, but to no avail. Shortly after the wedding, Madeleine, having been given the potion, apparently drops dead and is buried, only to be disinterred by

Murder and Charles and brought back to life as a zombie. Neil, who in a distraught and drunken state sees apparitions of Madeleine, seeks the assistance of a missionary, Dr. Bruner. Bruner consults with a witch doctor who is the only man known to have left Murder’s fortress alive. The doctor, however, refuses to become involved. Neil and Bruner then journey to Murder’s castle and camp on the beach below the cliffs. As Neil suffers from a tropical fever, Bruner approaches the castle alone, but later, images of Madeleine awaken Neil and he, too, enters the castle. Charles, meanwhile, regrets Madeleine’s transformation and begs Murder to return her to life, but Murder has his own ideas for Madeleine, who is completely under his control, and refuses. Charles realizes to his horror that he, too, has been tainted by the potion and is slowly being transformed into a zombie. When Neil enters the fortress, Murder senses his presence, and after Neil collapses, Murder silently orders Madeleine to kill him. Unaware of her own actions, Madeleine approaches Neil with a knife, but Bruner grabs her hand from behind a curtain, and she drops the instrument and walks away. Neil awakens and follows Madeleine to the cliff, and Murder commands his zombies to kill Neil. Bullets do not stop the zombies, but when Bruner knocks Murder out, the zombies topple off the cliff to their deaths. Murder awakens and eludes Neil and Bruner until Charles, who has recovered some of his motor capabilities, pushes Murder off a cliff. The fall kills Murder, and Charles is unable to regain his balance and falls to his death as well. Murder’s death releases Madeleine from her stupor and she is restored to Neil. 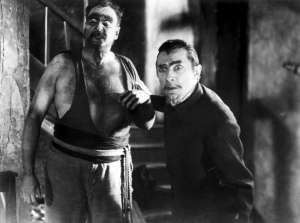